The Red Cross owes its existence to the vision of a Swiss businessman, Henri Dunant (1828-1910), who was a man with a faith, and was an early member of the Christian Association of Geneva. The International Committee of the Red Cross (ICRC) was founded in Geneva in 1863, and in 1864 they ratified the first “Geneva Convention” (For the Amelioration of the Wounded and Sick in Armed Forces and Field.) Critically, its members would give aid impartially, whichever side the patient had fought on. 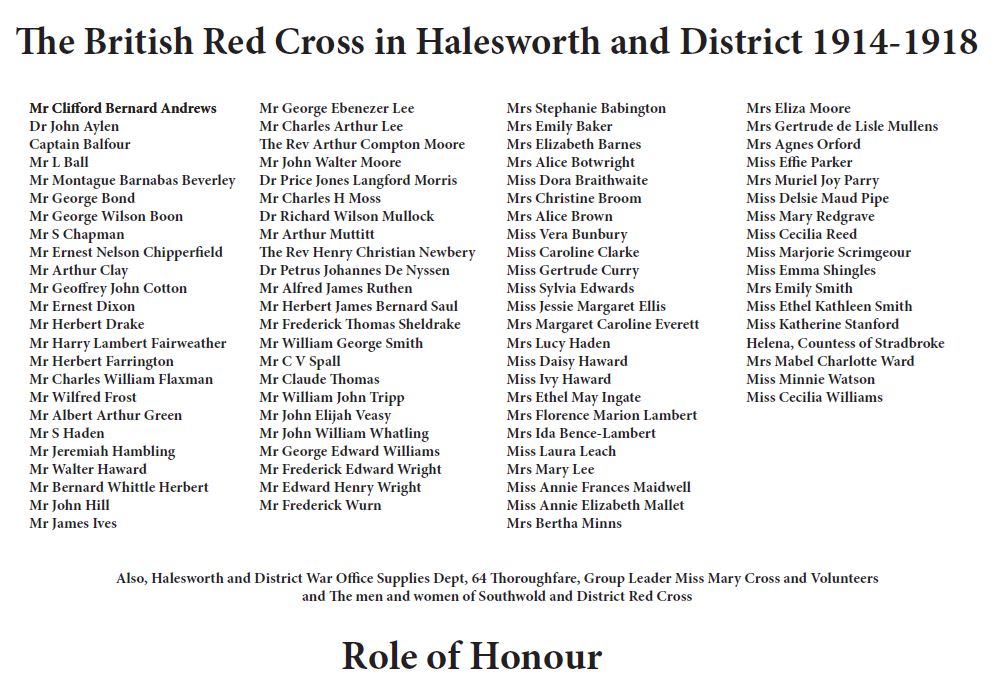 The British Red Cross was formed in 1870, but it was not until 1909 that the War Office made them responsible for configuring and training Voluntary Aid Detachments (VADs), to provide supplementary aid to the Territorial Medical Services in every county.

The men of Halesworth and District would have had every reason to feel pride for the way in which they responded to the call for volunteers.  For swiftly, with Southwold, Reydon and Walberswick men, they founded Suffolk VAD 35 in 1910.  Their Commandant, who was responsible for First Aid, Stretcher, Parade and Air Raid training was Dr Richard Mullock, a Surgeon and Doctor in Southwold. Between 1910 and 1917 well over one hundred men served in this, fifty seven of whom were either called up or volunteered for active service. Three were killed in action.

Their main duty was to meet the convoys of hospital trains arriving in Halesworth Station with the wounded from the front, and to stretcher, each time, around twenty patients up to the Patrick Stead, which had been designated a Red Cross Military Hospital. Also, fifty or so to vehicles waiting to transport them to Henham Hall Military Auxiliary Hospital.  The convoys arrived regularly throughout the War. They also performed orderly duty at the Patrick Stead and air raid duties.

And awaiting them at the Patrick Stead were the women of Halesworth and District who had formed Suffolk VAD 32 in 1911 their Commandant was Dr Petrus Johannes De Nyssen, a Surgeon and Doctor in the town.  He was responsible for First Aid and Nursing training, with the women’s main duties being the provision of nursing care.

In August 1914 the vicar of Southwold told the readers of his magazine that the Countess of Stradbroke had given up the best part of Henham Hall for the provision of a Red Cross Military Auxiliary Hospital complete with operating theatre. VAD members came from as far afield as London and Birmingham to work there, also the women’s section of the Southwold Detachment assisted.

The Matron of the Patrick Stead Hospital was Miss Cecilia Reed, a remarkable woman mentioned in Military Dispatches for her work there during the War.  Before her appointment in 1913 she had trained at the Norwich and Norfolk Hospital, from whom she received a beautiful silver brooch commemorating ten years of “Faithful Service” [on display in Halesworth Museum]. She is quoted in the Halesworth Times, dated the 16th February 1915, as saying, “They are splendid men; the work has been considerable, but I have enjoyed it: if they are a fair sample of the British Army, it is a very fine tribute.” “We are expecting another convoy shortly.”

The Halesworth and District women of Suffolk VAD 32 would have had, just like the men, every reason to feel pride in their achievements; they were as a group exceptionally committed to the care of their patients and gave many thousands of hours of voluntary service. Margaret Everett, the wife of the Chemist, for example, gave 4,380 hours, and Eliza Moore, wife of the clothing shop manager, gave 3,938 hours; but it is fair to say that looking at the women’s Red Cross records from the time, these were just two of the many who gave hours running into the thousands.

A notable Halesworth member of Suffolk VAD 35 was the Rev Arthur Compton Moore of St Mary’s Church, he was very involved in overseeing the supplies at the Patrick Stead Hospital where he was Chairman of the Trustee’s. Writing in the Halesworth Times in 1915 he appealed for funds to finance an x ray machine for the hospital.

Another striking member of Suffolk VAD 35 was the sixteen year old Wilfred Frost, who assisted on convoys, with stretcher work and on orderly duty at the Patrick Stead.  He lived at 8 Thoroughfare where his parents had an ironmongers. His elder brothers G J and R W Frost were killed whilst on active duty; he himself was called up in June 1918, and he was still in training when the guns fell silent on the 11th November 1918, so never saw active service.  He was the father of Sir David Paradine Frost the British Broadcaster. 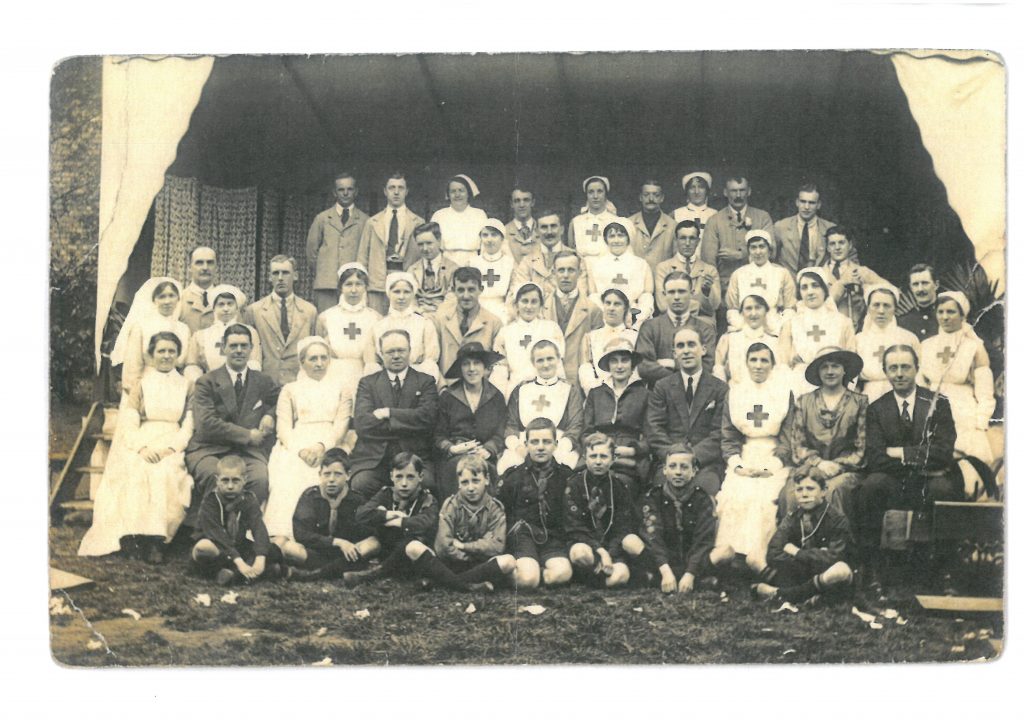 One might think this contribution to the care of the Military Sick and Wounded would have stretched Halesworth and District to its limit, but no, they “dug deep” once again and formed under Miss Mary Cross another large group of volunteers who worked out of 64 Thoroughfare, operating the Red Cross Halesworth and District War Office Supplies Dept.  Here they manufactured such items as roller bandages, dressings, swabs, pillows and slippers, and according to the Halesworth Times in 1915, produced over 37,000 items in the first year.  These were sent to a central Ipswich store, from which they were despatched to the Red Cross First Aid posts at the war front.  They continued this work until the end of 1918.

At Henham Hall Military Auxiliary Hospital, Helena the Countess of Stradbroke was appointed Commandant by the Red Cross, she continued in this role until the first week of April 1919, when it closed. Among her many duties she kept meticulous records of her patients in black bound notebooks, a page for each; she also corresponded with her patients’ next of kin, and they with her. [Can be viewed at the Suffolk Record Office in Ipswich.]

Helena had married George the 3rd Earl of Stradbroke in 1898, she was the daughter of Lt General James Fraser.  James had been a leader on one of the first expeditions the British Red Cross mounted to the front of the Franco Prussian War in November 1870.  In 1914 when World War 1 broke out, Helena was acting President of the East Suffolk Branch of the Red Cross.

They are remembered with Honour. 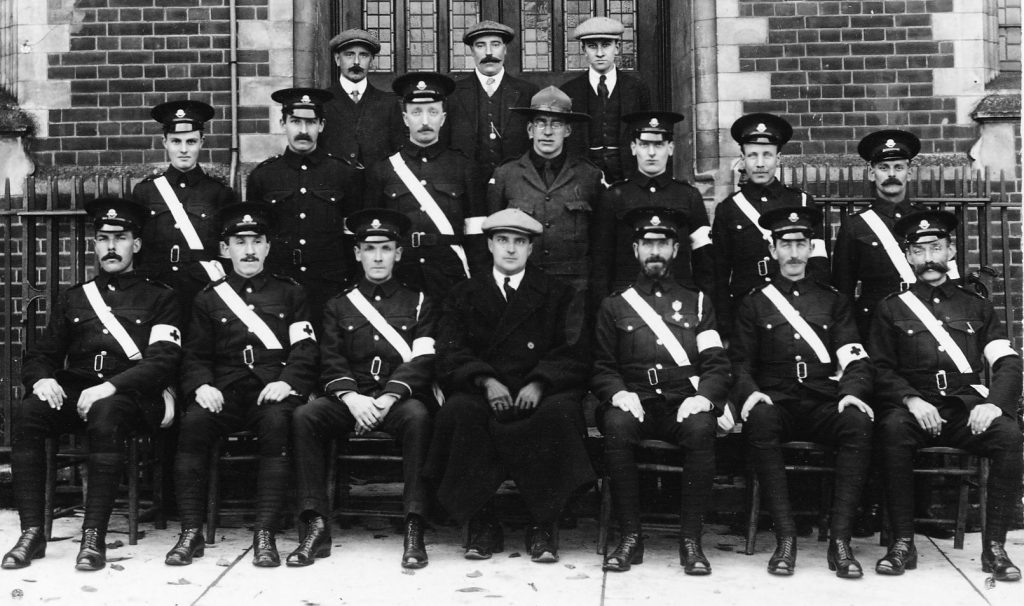