We are delighted to announce that the Museum will be opening again on Tuesday May 18th.

We will be looking for a number of additional volunteers this season.

The stewards are the face of the Museum. They are our main contact with the visitors. They provide information about the Museum and feedback about the visitors. We have a number of ‘shifts’. From Tuesday to Saturday there is a morning shift from 10 to 12:30 and on Wednesdays we have an afternoon shift of 12:30 to 4pm. Stewards will arrive a few minutes before opening times and will leave a few minutes after.

The Museum is hoping to extend its opening hours by having afternoon openings on Fridays and Saturdays. We will need additional stewards for these opening.

Qualifications required? None. All we need are people who are happy to talk to visitors and make them feel welcome. As to historical knowledge, you will pick that up as you go along. If you are asked a question to which you do not have an answer, it is OK to say that you don’t know. We have a form that can be filled in and someone will then get back to the visitor with an answer.

If you’re interested or would like to know more, just call Brian on 07715 679711 or e-mail the Museum at office@halesworthmuseum.org.uk and arrange a visit to the Museum for a chat and a look around.

We are expanding! The Museum has taken up the area formally used by MENCAP and will be re-opening a door connecting this space to the main display area. At the same time we are moving large items from a store in Holton to a better storage facility in Upper Holton

We need a number of volunteers to help in this project some helping to move items, some helping to update the catalogue (we have to know where every item in our collection is), some to help with cleaning after the building work has been done and with luck someone who is willing to co-ordinate the project.

This is the name we have given to the developments we are planning this year (and perhaps into 2022). These include the additional opening hours and the Museum extension as well as the display of the Cookley Roman silver coins and the Blythburgh Iron Age coins. In addition we want to photograph significant items in our collection, adding the images to our computer catalogue. We would also like to extend our audio-visual offering to visitors by way of a touch-screen display. We would really welcome help in doing this.

There are a number of other areas where additional expertise would enhance the Museum’s offering to the town and surrounding villages. For example some of the skill we could use: web site editors, graphic artists and transcribers amongst others

People of the Halesworth area have responded magnificently to the Halesworth and District Museum’s plea for help to secure the return to the area of a hoard of Iron Age gold coins recently unearthed near Blythburgh. They are among the earliest coins produced in Britain and carry intriguing images in the shape of animals, hidden faces, swirling patterns and strange symbols. One at least is the first of its kind ever to be discovered. How they came to be left or buried over 2,000 years ago is, for the time being, a matter of speculation.

£16,000 was needed to purchase the nineteen rare pieces once they were declared Treasure Trove. The hope was to raise at least £2000 of this locally. In the event donations from local people have amounted to well over £5,000 and the Museum has successfully applied to national grant-making bodies for the balance.

Pauline Wilcock, Chair of the Museum’s Trustees is full of praise for the local response. “Thanks to the magnificent generosity of local people, we have reached our target well within the three-month period we were given. It says a lot about people’s understanding and appreciation of the importance and interest of our local history. We shall do all we can to make sure that everyone gets a chance as soon as possible to see and wonder at these incredible survivals from two thousand years ago.”

The coins should shortly be released by the British Museum where they are currently stored. Halesworth Museum is set to reopen after the next stage of lockdown is lifted, hopefully in mid-May. “For now, the next task is to acquire a secure display cabinet which will show the coins off to advantage and allow us to explain their importance”, explains Museum Curator, Brian Howard. “As a museum run by local people for local people, we owe that much to everyone who has been so generous”.

Looking forward to hearing from you.

Halesworth and District Museum is at the Halesworth Railway Station Building

In his research into the de Argentein family, lords of the Manor of Halesworth, David Wollweber has found some fascinating facts relating to the carved beam on front of the Ancient House, often called Dame Margery’s.

At this Thursday’s Museum Talk he will explain some possibe meanings of the carvings and introduce medieval fables and a cast of mythical beasts, including Reynard the Fox, Griffins, Lions, Ape Physicians, and Beavers. He will also discuss where the Carvings came from and who comissioned them.

He will also discuss where the Carvings came from and who comissioned them.

If the carvings have intrigued you, do come to the URC this Thursday for the talk which starts at 7:30pm.

£3.00 entrance (£1.50 for Friends of the Museum). There will be refreshments before and after the talk. 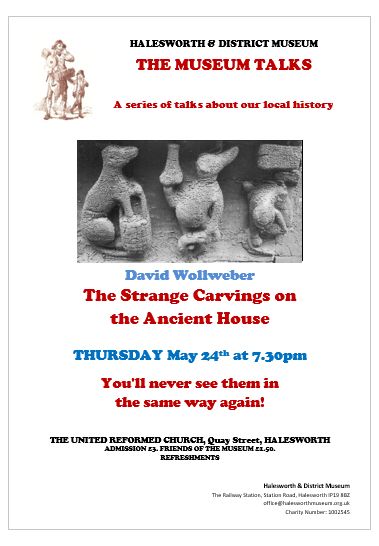 The Wissett Hoards have returned to the Museum in a nice new case. 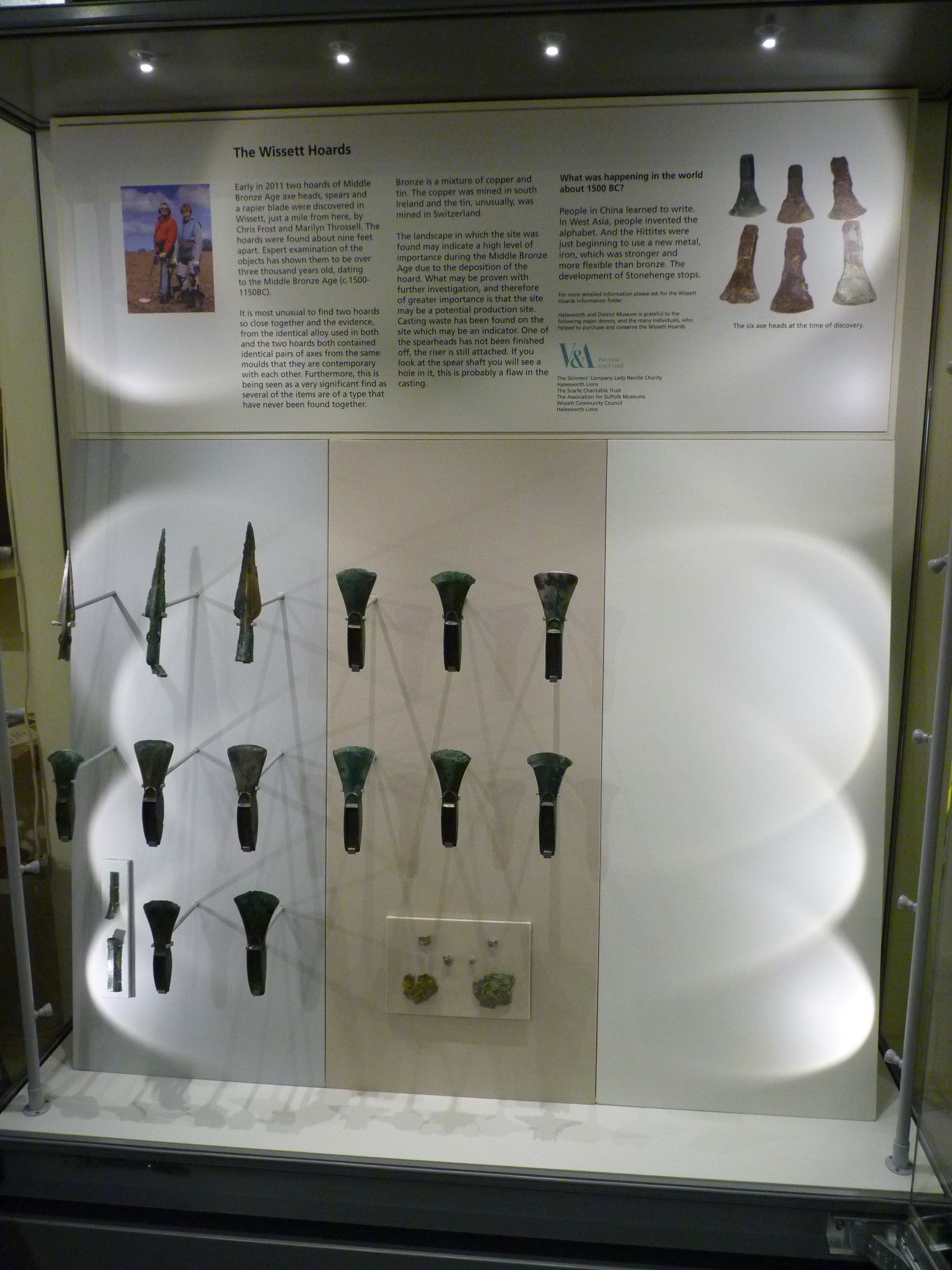 AN APPEAL FROM THE HALESWORTH AND DISTRICT MUSEUM

The Halesworth and District Museum has the chance to buy a rare and significant local document that has just been offered to the Museum by a bookdealer in Essex. It is the printed and highly detailed specification of work needed to construct the Bulcamp House of Industry (the Workhouse) in 1764. It was produced by the architect and builder of the workhouse, Thomas Fulcher of Debenham and is accompanied by a hand-written schedule of all the rooms in the proposed building.

We already have had the promise of donations and we feel that some of our Museum Friends would also like contribute. Attached is more information about the documents.

The documents are with the Museum, on approval, for a few week. To help us purchase them we need donations as soon as possible.

We are pleases to say that we have raised the sum needed to purchase these papers. Thanks to all who have helped us secure them for Halesworth.

The British Red Cross in Halesworth

The Halesworth Museum is also planning a display in relation to the British Red Cross, founded in 1870.  In the early twentieth century, and in support of the creation of the Territorial Army, a Voluntary Aid Scheme was introduced, making the British Red Cross responsible for setting up Voluntary Aid Detachments (VADs) in every county. In Suffolk the first VAD was registered in 1909, the Detachment in Halesworth numbered seventy men and women who served in the town in WW1. The women were largely engaged in voluntary nursing at the Patrick Stead Hospital and the men in air raid and convoy duties. Henham Hall became one of the 33 Auxiliary Hospitals set up in Suffolk during this war and over 1700 sick and wounded men were nursed there by volunteers from across the country. If you have any family photographs or other memorabilia of the Red Cross in Halesworth or at Henham Hall perhaps you would like to lend them to the Museum for a future temporary display, or gift them to the Museum for our collection.  In either case, in the first instance please contact our volunteer Dee on 07903 567012. Text would be fine leaving a call back time when she can contact you.

Railway relics return home to Halesworth after being purchased by museum at auction.
10 January 2018

Beccles and Bungay Press release about the large sign

The other items that we bought at the auction

15 November 2017
As you may have seen the Museum will be shut from November to the beginn of April due to remedial work being done to cure the damp problem which has affected parts of the Station Building for years.

In three days we emptied the display cases ready for the removal firm to take items and cases into storage. Thanks to the seven volunteers who have worked hard achievibg this. Whilst this work has been underwayother volunteers have been responding to queries.

We hope that most of the work will be complete by the end of the week. But don’t forget the background work of the Museum will still be continuing.

Two panarams: the Study Room and the Museum Gallery and the end of work on 14th.

The Museum is reopening tomorrow after the completion of the first phase of work funded by the “Ready to Borrow Grant”. The main room and the study room have been redecorated, the security system has been upgraded and new carpeting has been laid in the public areas. Our spring exhibition has been delayed a few weeks but will be ready by the end of the month.
Pictures of the main room and some of our reference works.

Come and visit us soon. 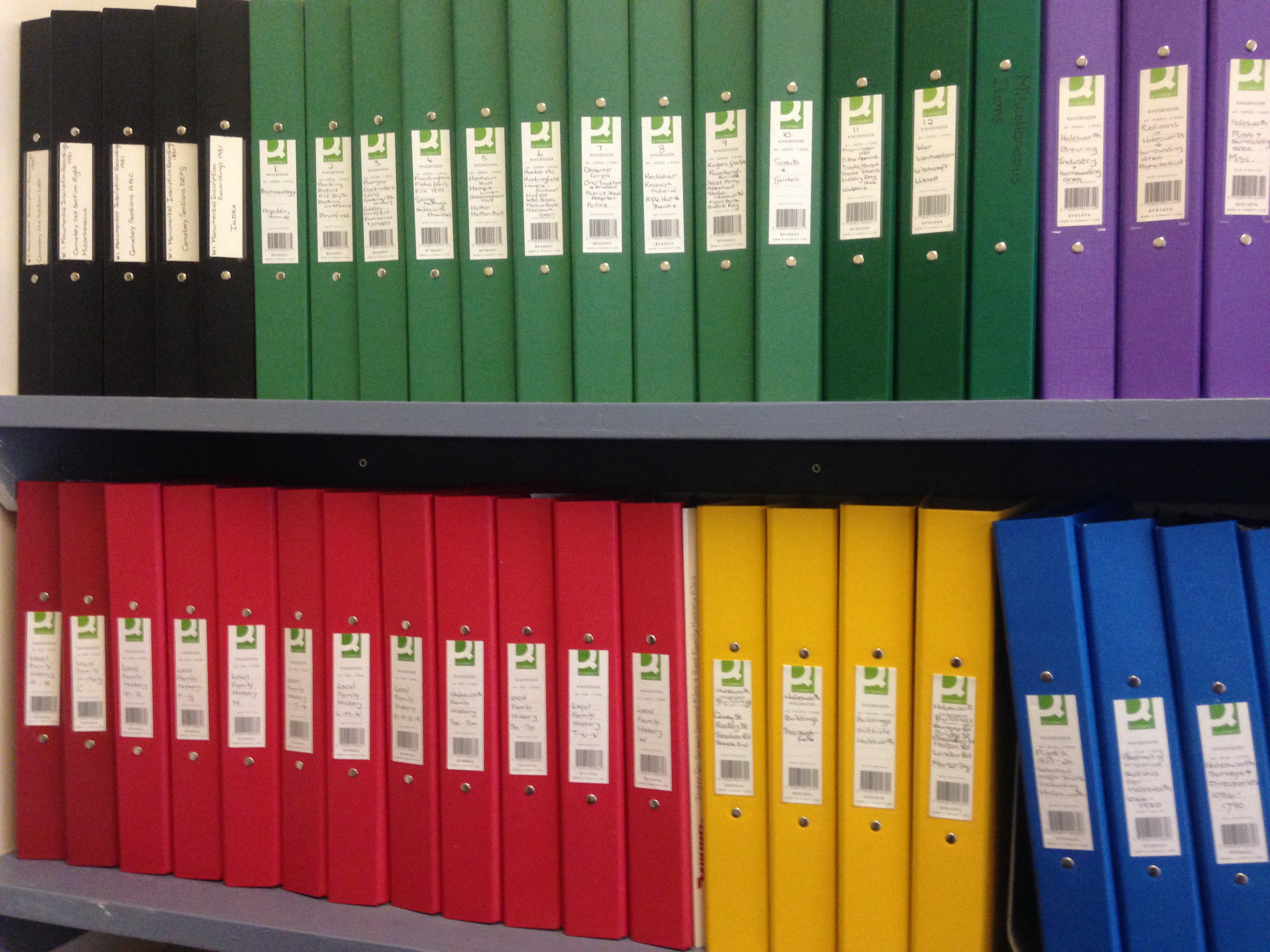 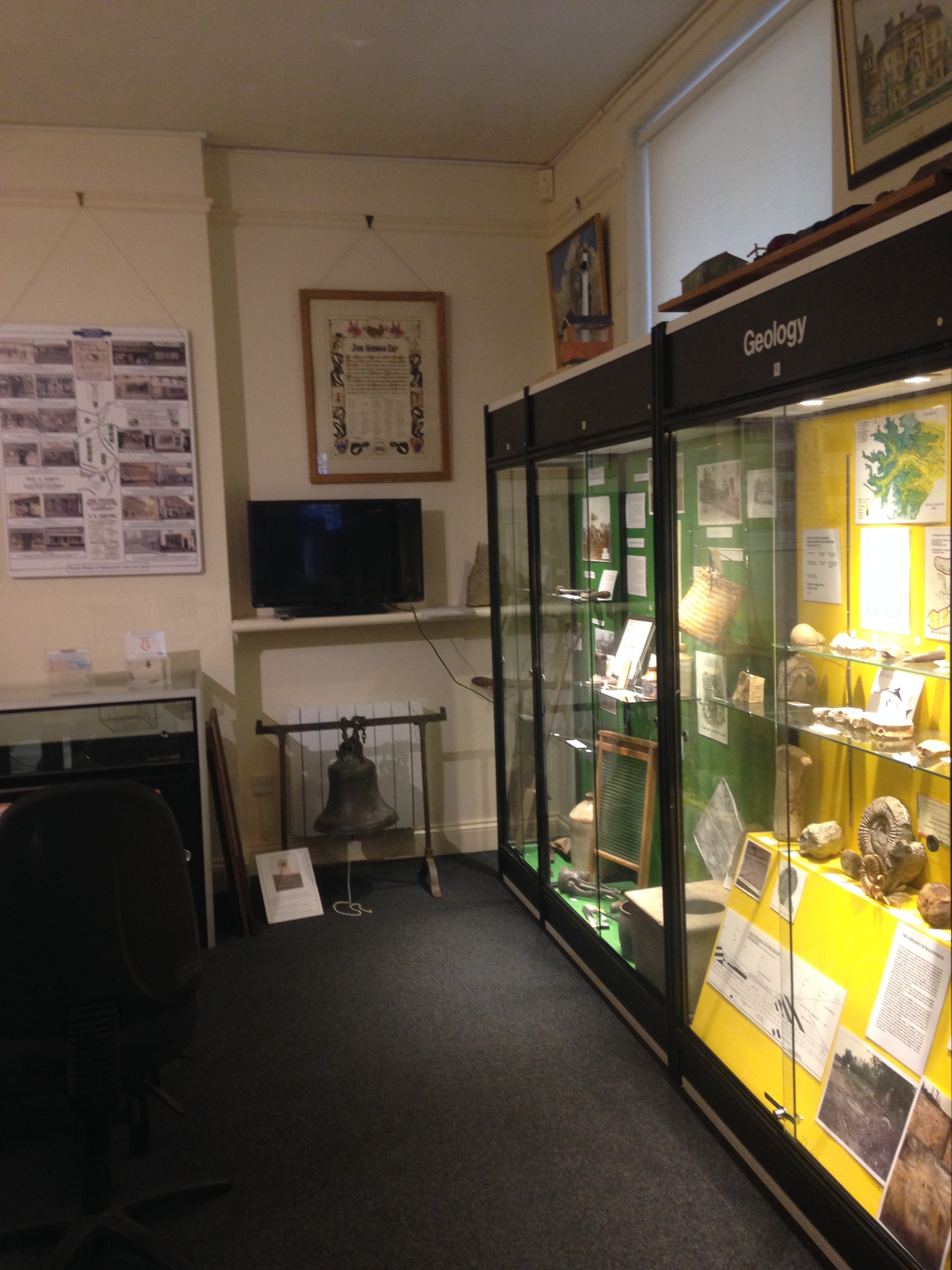 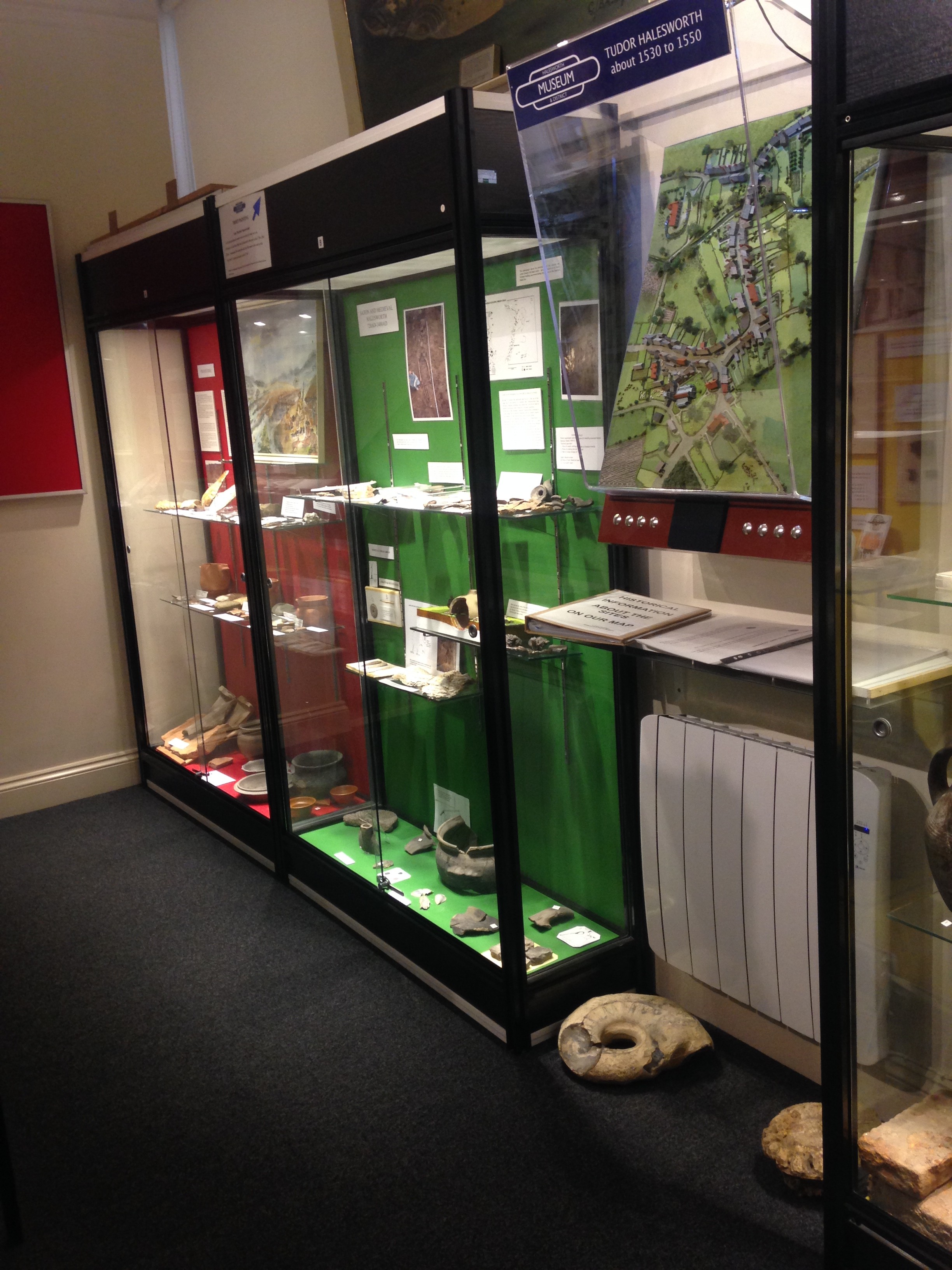 The READY TO BORROW GRANT has allowed us to do a number of improvements to the public area.

So for (end of January 2017) we have pained throughout, improved the security and are carpeting the Main Room, the Entrance Lobby and the Study Room. Here are some pictures taken on 27th January.

Four projects finished so far this financial year [2016]. The new heating system is in and working, the entrance hall has new lighting, the display cabinets have LED lights and we have just had the images fixed to the down stairs windows.

We are very lucky to have so many volunteers working for our Museum. Some are active in the Museum, some work both at home and in the Museum and some just at home.

However we do need more help, additional stewards will be useful as back-ups for holidays of regular stewards or even to add to our regular stewards. There are many other and varied jobs in the Museum, perhaps you have a particular skill or interest that could be of interest. If you think you would like to help do give us a call.

I have just had some sad news. Michael Gooch who wrote the book ‘The People of a Suffolk Town’ together with his wife, has recently died. Our commiserations to his family.

Mike Fordham, Curator of the Museum, retires and moves to Norfolk 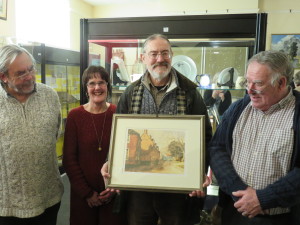 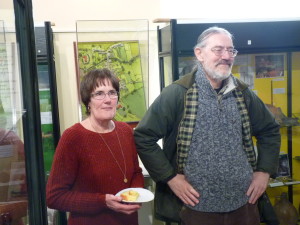 We will be anouncing this years talks as soon as we can.